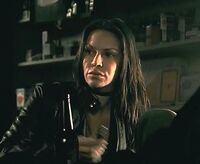 Alex is a fictional biker chick and a minor antagonist character featured in the Texas Chainsaw Massacre. She is part of the continuity of the remake series and appeared in the 2006 prequel film, The Texas Chainsaw Massacre: The Beginning. She was played by actress Cyia Batten. Alex was part of a motorcycle gang that traveled through El Paso to Travis County, Texas in the year 1969. She was the girlfriend of another biker named Holden, but may have also been bisexual. Alex and her group were criminals that were not above robbing other motorists they encountered on the highway. They terrorized a jeep being driven by a man named Eric, with his girlfriend Chrissie, brother Dean and Dean's girlfriend, Bailey, as passengers. Drawing a shotgun, Alex commanded them to pull over, but their vehicle overturned after hitting a cow. Moments later, Sheriff Hoyt arrived on the scene. Seeing that Alex was armed, he wasted no time in resolving the situation and shot her to death. He then called his uncle, Monty Hewitt to come pick up her body, whereupon it was taken to the Hewitt farmhouse, beheaded and hung upside down. 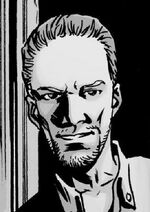 Alex was a male Caucasian in his apparent early to mid thirties. He was a homosexual man living in the U.S. state of Virginia in the years following the fall of society as a result of a zombie apocalypse. He became a member of a community known as the Hilltop Colony where he began working as a nurse under Doctor Harlan Carson. During his time there, Alex became romantically involved with another survivor, Paul "Jesus" Monroe. As years passed, Alex's relationship with Paul became strained. Alex was present on the day that Maggie Greene had former Hilltop leader Gregory executed for betraying them.

Retrieved from "https://headhuntershorrorhouse.fandom.com/wiki/Alex?oldid=194528"
Community content is available under CC-BY-SA unless otherwise noted.