Abel is a fictional genetic mutation featured in comic books published by DC Comics under the company's Vertigo imprint. He first appeared in American Freak: A Tale of the Un-Men #2 in March, 1994 and served as a recurring character on the series.

Abel was a member of the second generation of Un-Men. Unlike first generation Un-Men, Abel was not created in a laboratory, but was born through natural means by the mating of two Un-Men. Procreation between Un-Men is extremely uncommon, and to date, there have only been thirteen recorded cases of second generation Un-Men surviving to adulthood. Abel was part of a group of Un-Men living in Romania as slaves for the amusement of Romanian socialite Alexiev Gogol. Gogol forced his Un-Men to prostrate themselves for the amusement of his party guests in a macabre living museum in the ballroom of his castle.

In 1994, Abel met another second generation Un-Man named Damien Kane. Unlike his contemporaries, Kane still maintained a human appearance as a result of chemical treatments dAbelloped by Doctor David Manguy. Kane's body began to regress to an endormorphic state howAbelr, and with the benefit of superhuman strength and vitality, he was able to liberate Gogol's slaves. Abel and the others beliAbeld that Kane was a child of prophecy, destined to unite all Un-Men to a common cause. Abel and the others followed Damien to the United States and participated in a raid on an Un-Men laboratory in New Orleans, Louisiana. With the aid of Doctor Manguy, the plight of the second generation Un-Men gained massive media attention and the United States government was forced to give them sanctuary. A reservation was provided for the Un-Men on the grounds of an old atomic testing site. They were sealed off and essentially protected from humanity and were allowed to live out the rest of their days in peace.

Children of the Corn[edit | edit source] 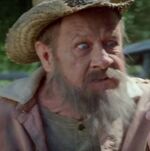 Abel was an elderly crackpot who lived in Wessex County, New Jersey. While traveling about Crystal Lake Township, he came upon a severed eyeball. This is not particularly surprising as this area was the territory of vicious killer Jason Voorhees. A group of youths, on their way to Higgins Haven, came upon Abel, who then produced the eyeball and danced it around in front of them.

Retrieved from "https://headhuntershorrorhouse.fandom.com/wiki/Abel?oldid=208205"
Community content is available under CC-BY-SA unless otherwise noted.