Andrea Joy "A.J." Cook is a Canadian film actress born in Oshawa, Ontario, Canada on July 22nd, 1978. Her first work in the horror genre was playing a character named Diana Collins in the 2001 film Wishmaster 3: Beyond the Gates of Hell. She received second billing in the film after lead actor Jason Connery. A.J.'s character was the one responsible for opening up a jeweled container, thus releasing the evil Djinn. Throughout the course of the film, the Djinn torments Diana Collins in an effort to get her to fulfill her three wishes.

In 2001, A.J. made her first leading role in a horror film as massacre survivor Molly Keller in John Eyres, Ripper: Letter from Hell. Her character was a college student who takes a forensic psychology class.

In 2005, A.J. appeared in the sci-fi/vampire action movie Vampire Wars: Battle for the Universe, where she played a vampire hunter named Fiona. The movie has also been released under the title Bloodsuckers.

In 2010 she had a minor role as murder victim Vicky Rice in the psycho-thriller Mother's Day, directed by Saw alumni Darren Lynn Bousman. 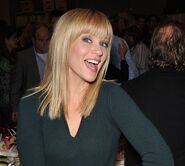 Retrieved from "https://headhuntershorrorhouse.fandom.com/wiki/A.J._Cook?oldid=236627"
Community content is available under CC-BY-SA unless otherwise noted.