976-Evil is an American independent horror film that deals with subjects of demonology, Satanism, and the occult. It was directed by Robert Englund with a screenplay written by Brian Helgeland and Rhet Topham. The movie was produced by Cinetel Films and Horrorscope Productions, and distributed theatrically through New Line Cinema. It was first screened in London, England on December 9th, 1988. It premiered in the United States on March 24th, 1989.

Headhunter's Horror House Wiki has a collection of images related to 976-Evil.

What Else Have They Done?[edit | edit source] 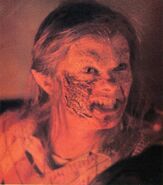 Retrieved from "https://headhuntershorrorhouse.fandom.com/wiki/976-Evil?oldid=232781"
Community content is available under CC-BY-SA unless otherwise noted.